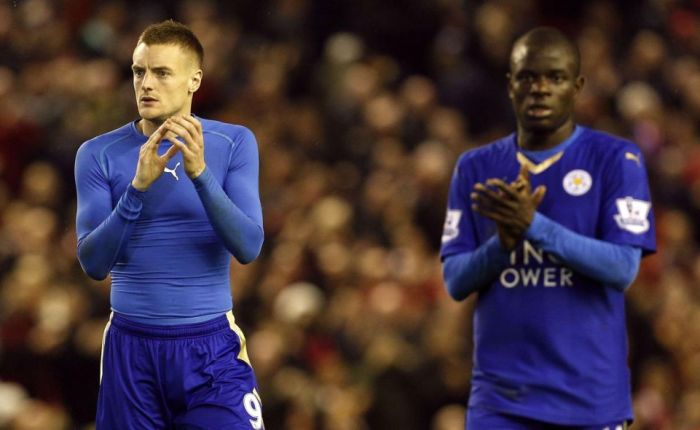 N’Golo Kante has made a £30m switch to London club Chelsea, threatening the start of a break-up of Leicester’s title winning team. At first glance, it makes Jamie Vardy’s choice to reject an approach from Arsenal all the more puzzling. At the time it was believed this was made after consulting key members of The Foxes squad about their future plans. So what does it all really mean?

Firstly, it means Vardy’s seemingly difficult decision, takes on a whole new dynamic. Let’s say during the pause he took from making an immediate choice, he did ask the likes of Kante and Mahrez what their next career choices were going to be. When he turned The Gunners down, it was a sign the squad was about to adhere to the wishes of Claudio Ranieri, and give Leicester one more year before moving on.

Perhaps Vardy was never given that reassurance from the key players. It’s unlikely they would outright lie to him if asked, so at best, he would have gotten an unsure response.

This does mean Jamie Vardy analysed his choices and made what he felt was the best decision for him. And he made the correct one.

He’s at the Premier League champions. Arsenal may be a bigger club, and with a new manager could have offered a fresh alternative, but the reality is they haven’t got a better chance of taking the title than Leicester.

Size and stature mean little if stunted by stubborn ideas.

That lack of desire to change approach is of course driven by Arsène Wenger. Other than teasing Vardy with the grandiose setting and a chance to take his place in the history books along former players like Thierry Henry, there’s very little that made logical sense.

Jamie Vardy is already 29 years of age, everything that is occurring now already supersedes what he would of dared dream a few years ago. From a professional standpoint, other than Arsenal mythology, there is no tangible evidence he would further develop under Wenger’s watch.

The Arsenal boss has a history of taking promising young players from other clubs and freezing their potential in the same room as he keeps his title aspirations.

Alex Oxlade-Chamberlain must fear he will become another Theo Walcott. The latter now looking for a move to another club to reignite a career the Frenchman killed. One of those clubs is West Ham, where another former Southampton youth talent, Carl Jenkinson, went on loan for the same reason. Calum Chambers will be hoping he isn’t the Oxlade-Chamberlain to Jenkinson’s Walcott.

During this time, Vardy’s talent has risen exponentially.

These must have been considerations the striker took, along with a major one: Wenger was disrespectful trying it on before the Euros.

For Kante things look decidedly different. He’s only 25, and is looking beyond a glory year with underdogs in the Champions League. His new manager, Antonio Conte, was equally absorbed with the Euros and approached at a more appropriate time.

With age on his side, the move should be (using historical data) a wise one. With Roman Abramovich’s desire and resources, Chelsea will get back to the top of the English game. It remains to be seen if Leicester can remain in the top four after coming from nowhere and against all expectation.

Conte is also a close confidante of Ranieri’s, so one has to assume the move was sanctioned, even if somewhat begrudgingly, without any negativity.

With it now looking like Riyad Mahrez will follow N’Golo Konte out of the King Power Stadium, a positive atmosphere is something Ranieri will need to maintain at the club. Losing two-thirds of the important title winning trinity will test his minerals as a manager. Who would have thought, after taking 5000/1 outsiders to championship glory, his biggest test was yet to come?

But it was a title success built on togetherness and shared belief. Whoever comes in must have passed a character suitability test and can converge into the psyche that shook the Premier League.

Leading that line is Jamie Vardy. He’s already living the dream. A move now doesn’t give a Hollywood ending to this story; it would show a betrayal to an ethos that allowed hard work and desire to overcome the odds and those with greater financial clout.

Kante moving on can be understood, but Vardy staying is to be applauded and admired.

John Terry will go down as a Chelsea legend, of this there can be no doubt. The esteem in which the fans hold him ensures he is free from criticism. But for those looking in, the captain of Roman Abramovich’s footballing empire is a questionable human being whose greatest strength is looking after number one. That’s why his latest outburst, informing the world in a post-match interview with the BBC that his contract wasn’t being renewed, should come as no surprise.

It should be noted that the club haven’t flatly refused him an extension. All they have said is that for now they won’t be renewing his contract until a new manager has been appointed. This is a positive step by the London club. In the past there’s been rumours that Abramovich interferes too much with transfers. Clearly, the board want the new boss to have the final say on all ins and outs.

A man that loved the club would appreciate this, respect it, and await his new gaffer’s decision. But that requires a degree of loyalty and honourable behaviour he’s been unable to show his wife, so why an employer should be given special treatment is unfathomable.

Of course this accusation will enrage Chelsea fans but they deserve him and any insults that head in his general direction. They supported him while booing Wayne Bridge for having the audacity to feel disgruntled that Terry slept with his partner.

Somehow Terry manages to appear the victim in spite of his vile actions. Losing the England captaincy was everyone else’s fault but his. Later in his career he announced his retirement from international football after the Anton Ferdinand incident. Being acquitted in court was supposed to render the evidence that made the FA fine him £220,000 irrelevant.

Just because a civil proceeding couldn’t convict intent beyond reasonable doubt doesn’t mean his actions were naïve or without malice. He was playing the wise guy and conned his own fans once again.

He’s using them now to further his own end. If he cared for the club he’d have remained silent until a new manager was confirmed. It’s a Machiavellian plan to force the club’s hand with fan pressure. What makes it worse is how he said in the interview that no man is bigger than the club. So why act out of line as if he is owed special dues?

Chelsea should now emphasise the point that nobody is bigger than the club by withdrawing the offer to wait until a new manager is appointed. Keeping the door half open just places pressure on their shoulders. Furthermore, they should insist Terry makes a new statement declaring his desire to leave regardless of what a new manager says.

This will save face for both parties and Terry can claim he made the original statement because he wanted a definitive answer on his future to remove a long period of uncertainty.

It wasn’t just the club that were in his crosshairs, former players took a hit too. Comments about never playing for another Premier League club was a veiled dig at those, like Frank Lampard, that did stay on in England. The truth is no other top four side would offer Terry a contract anyway.

And if he wants an example of how to behave in the future he could do far worse than take notes on how Frank Lampard conducts himself in public. Always polite, professional and a gentleman.

All the virtues John Terry lacks.

For some time now José Mourinho has been making statements akin to the village idiot. So his latest course of action, demoting club doctor Eva Carneiro, could be seen as a further example of his diminishing IQ. However, it’d be foolish to think behind seemingly acts of madness there isn’t a greater plan at work.

First off, he probably was genuinely enraged that his team were down to nine men because Eva Carneiro opted to take to the field and treat Eden Hazard. This period of anger may have only lasted minutes. Maybe an hour at most, taking into account he’s a bit mardy at times. After this period he’d have seen sense (one would hope).

The facts all stack up in the doctor’s favour. She was called onto the pitch by the referee. Now I’m not saying a physio has to respond to this call, after all the player himself can wave off the help, but without such a response from the presumed injured party she was left with little choice.

Also – and most importantly now – a doctor has a duty of care that to the patient that exceeds all other issues. Whether it’s the height of competition or a traffic accident, a doctor has to put the person first. Chelsea FC as employers have to abide by this. They too can be held accountable for inaction or poor treatment. Eva Carneiro has an ethical duty to fulfil.

Moaninho (see what I did there) knows this as well as you or I. Misreading the game or not seeing the big picture is one thing, and he’s right to suggest all staff should understand every aspect of the game and how decisions impact it, but he also knows ethical responsibilities can never be overlooked.

Why has he taken such drastic action then? You may ask that whilst concluding he certainly is mad, come on, what boss would forgo his duty of care to players and what man would choose to not sit near Ms Carneiro every week. A crazy one, seems a fair answer. Or one that is using the furore to mask his team’s less than impressive start to the season.

The press love going wax lyrical for José’s Chelsea. They won the league last year in November and this season was gifted it, via their column inches, before a pre-season ball had been kicked. Not taking anything away from the achievement, after thirty-eight games the league never lies, they were the best the Premier League had to offer last season, but to make them appear invincible is pushing it a little.

Last season there were vulnerabilities there, it just so happened they were spared a decent sparring partner. This season they have started cold. Attempting to retain the title always brings extra pressures and perhaps it is this that can used to explain the Community Shield match and the performance against Swansea. That’s not taking anything away from the Welsh side, they more than deserved a point, but the Press’ Super Team shouldn’t be looking so inferior when playing at home to such opposition.

José’s obvious port of call was to dispute the red card. Only the bias Sky Sports team could even suggest there might be a case for a yellow. It was a red. Clear and simple. The Chelsea boss also knows this. The Eva Carneiro case has just padded out a week where he’d need to use a red card debate as deflection for the team’s performance.

There’s no doubt Chelsea will bounce back, they are a good side. But there’s also no doubt Mourinho is just using his favoured old tactic. The more the press and the clickbait sheep talk about him, the less they think about how his team are playing. Hopefully this time ethics, and the reputation of a well-respected doctor, will put the Portuguese manager to shame.

We all want to win, but decent people don’t want to do it regardless of the cost.